On Sunday morning, January 3rd, The New Orleans Track Club will host the 109th Anniversary Jackson Day Race, a road race open to participants of all running and walking skill levels. The event will take place at 8:30 a.m. starting on Marconi Drive at Robert E. Lee Blvd and finishing at Jackson Square in the French Quarter.

Since 1907, The Jackson Day Race has been a New Orleans tradition. The 9K (5.6 mile) course roughly follows the route that Lafitte’s pirates took in responding to the call of Major General Andrew Jackson for reinforcements preceding the 1815 Battle of New Orleans. This year’s event will be followed by a block party that features New Orleans food and music. 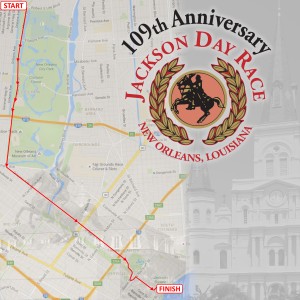