The French Quarter Task Force, an off-duty patrol of New Orleans police officers run by the French Quarter Management District, is getting new vehicles and equipment in its effort to patrol crime in the city’s iconic neighborhood.

Sidney Torres IV, the businessman who created and initially funded the patrol and related smartphone app 16 months ago, has donated three new all-weather Smart cars to the patrol – replacing the current all-terrain vehicles – and has revamped administrative functions on the smartphone app that connects patrol officers to the public. Changes to the task force app include the ability for officers to sign in and out directly on the app and the app user’s exact location will be sent when reporting through the app, instead of that user having to manually enter his or her location. 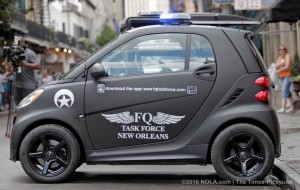 One of the new French Quarter Task Force’s smart cars is parked outside NOPD’s 8th District station on Thursday, June 2, 2016 in New Orleans. The new cars will replace the patrol’s Polaris vehicles. (Photo by Brett Duke, Nola.com | The Times-Picayune)